July 1st was my grandmother’s 75th birthday, so my family and I thought, what better reason to throw a party?  Honestly, it doesn’t usually take very much to spawn our need to make excessive amounts of food, open copious bottles of wine and party on [Wayne].  But for Grandma, we wanted to make it extra special and invite as many of her friends as possible… and send REAL PAPER INVITATIONS VIA THE POSTAL SERVICE.  If that doesn’t say, “I love you, Grandma” I don’t know what does.

I trolled the aisles of Michael’s I finally found inspiration in the Martha Stewart Butterfly Punch and the Muse glitter open stock paper paper by Recollections.  I had the blue square envelopes in my stash so that inspired the overall shape of the invitation.

{Note: I’m going to mention Martha Stewart products a lot.  I don’t have any special affinity to them in particular, they were just on sale at Michael’s at the time of this project.  I received no perks but… ehem… I wouldn’t mind them… just sayin’.}

I started by cutting circles out of white cardstock with my Martha Stewart circle cutter (1 per invite), and punching butterflies from the glitter paper (2 per invite). 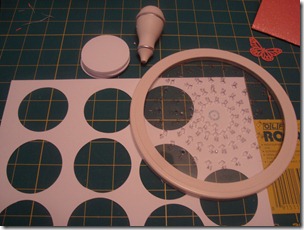 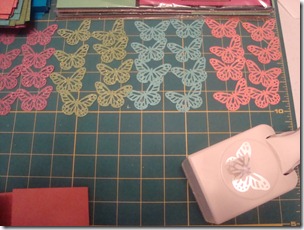 Originally I wanted the glitter side of the paper to be the outside of the card, but found out the hard way that it wouldn’t work… see that ugly cracking that happened when I folded it?

So, after a quick change of plans, I cut each sheet of glitter scrapbook paper (12 x 12) in half, then, with glitter side facing up, folded each side into the center creating two flaps.  Then repeated a bazillion times…  You see that white thing below?  I think it’s some kind of bowl scrapper for baking but it is perfect for smoothing down folds to get a perfect edge. 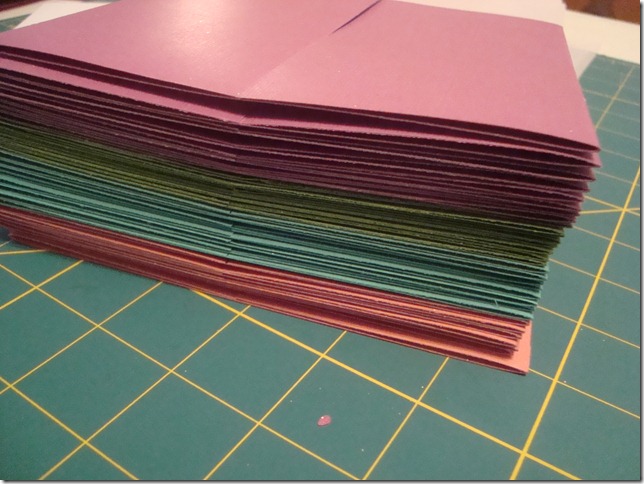 After that comes assembling.  I used a glue stick on the backs of the butterflies to affix in the center of the white cardstock circles.  Next, i used photo tabs (the double-sided tape kind) to attach the circle to ONE FLAP ONLY of the card, centering it over the two flaps.  I chose to alternate the butterfly color with the invite color… living on the edge, I know. 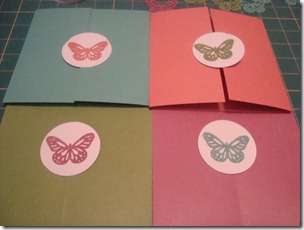 I printed the invitation information on vellum then cut down to size with my Fiskar paper trimmer and rounded the edges with the Martha Stewart punch. 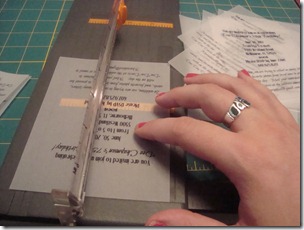 Next up, I used brads stuck through the remaining butterflies to attach the vellum to the inside in the invitation.  I lucked out and found perfectly matching brads in my scrapbook stash!

Then into the envelopes and off in the post they went!

So there you have it!  Easy DIY invitations… now who’s inviting me to a party?

And don’t forget to check out my prints for sale at:

View all posts by Mariah

"When you examine the lives of the most influential people who have ever walked among us, you discover one thread that winds through them all. They have been aligned first with their spiritual nature and only then with their physical selves.” -Albert Einstein

Copyright 2012. All Rights Reserved. All photography and writing within this blog is original content by Mariah Williams unless otherwise specified. Any use of the images or text are to be used by permission only. Ask for permission HERE.